writer Boris Pahor is at home. His house is in Kontovel, in the immediate vicinity of Trieste, a few minutes by car from the Slovenian-Italian border, with a wonderful view of the sea, in a cul-de-sac of a clustered settlement. This is now his quarantine too. He will be 107 years old in August.

A man who survived World War I, Spanish flu, World War II, four camps and three totalitarianisms is now still surviving a coronavirus epidemic. He tells the Slovenes: stay at home, read books, Slovene and international classics, forget selfishness and follow Christ who said that we have to take care of others.

Boris Pahor starts on the same day. With breakfast and reading the newspaper. Dela too.
PHOTO: Vera Radic

His quarantine looks like what his life has been like for the last few decades, when he was mostly writing and reading. Because of eye problems, his assistant now reads to him Vera Radic, he also dictates to her what he would write himself. After breakfast—coffee latte, bread cut into five slices, butter, jam (and a few vitamin pills and ginkgo as a reminder)—he reads the newspaper. Delo, Primorski dnevnik, Novi list also listen to reports. Then the books follow. He had just read an interesting story by Marianne Deganutti How I became Slovene.

Nothing is missing at the moment. His daily routine is strictly regulated. Lunch is at half past twelve. Only vegetable soup and vegetable stew. Then rest. Afternoons used to be devoted to visits, but now nobody is there. When the phone broke in four days it was bad, he said, but luckily it’s working again and taking a lot of calls (including ours). A friend called him Evgen Bavcar and reported that his testimony about the Spanish flu, one of the greatest human catastrophes that broke out in France in late 1917 and peaked over the next two years, was published in the French journal Causeur. Pahor spent it with his mother and younger sisters Mimica and Evelina in Trieste, they lived on a hill near St. Just. His father was drafted into the Austro-Hungarian army as a war photographer in Pula, and his grandfather was born in Ponterosso sold but couldn’t reach her up the hill.

Pahor remembered how they were starved to death and how those sick with fever lay together in the same bed. When her mother fell to the ground from dizziness, a five-year-old boy helped her to her feet. He also remembered that his grandfather had sent them a branjevka to make them tea. He wrote about the death of his sister Mimica in a book my dryness in the chapter Deadly Spaniard. He did not forget to add that another “flu” was coming for the “Spaniard” – fascism, which took many things from the life of Slovenes.

The Law of Humanity

Weeks ago he wrote a letter to Italian media and politicians questioning the President Sergio Mattarella publishes the report of the Italian-Slovenian Commission on Foibas. But nothing happened. Now is the time to teach young people that, he stressed, now.

He is patiently waiting for the postman to bring him the package. A new book Dear Jancar, »which places the reality of Slovenian literature in the European context. Jančar is the only one who followed me,” said the old Slovenian writer, who was recently featured in a BBC documentary as the oldest man to survive Nazi concentration camps. Now that he is not going anywhere and no one is coming to him, he emphasized that he is not bored because he has never been bored in his life. “Not one day.” 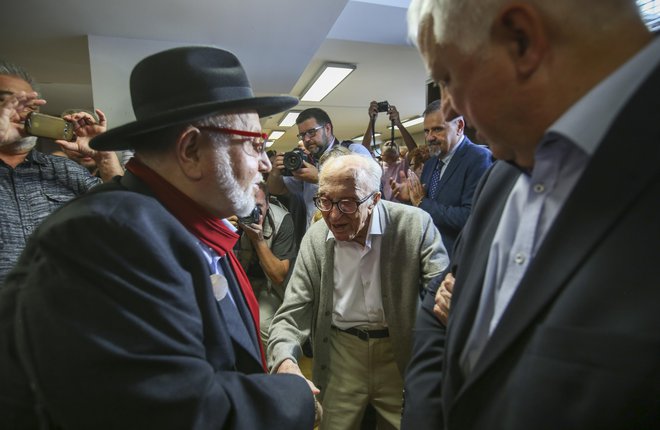 A writer who survived World War I, Spanish flu, World War II, four camps and three totalitarianisms.
He overcame the Spanish flu with his mother and sisters in Trieste.
The coronavirus will teach humanity that we are all equally vulnerable.